Here are a few extracts from the project completion report, with an overview of the philosophy that was and is central to our approach:

Adventure in Everyday Living provided attendant services for all kinds of day, evening and weekend outings, as our promotional materials suggest. Our project nurtures physical, social and emotional independence for the disabled. Some may see these ideas as a far-reaching commitment. But they clearly express the kind of service we intend to develop—one that offers the disabled a choice, accompanied by the fewest limitations or restrictions. (p.45)

A city like Montreal, of course, offers a host of options for outings, from high-profile venues to lesser-known hangouts, including a symphony orchestra, La Ronde, coffeehouses, trendy café terraces and bars. Living in Montreal means going shopping and having medical appointments. It means opening the door, without knowing exactly what you’ll find. (p.46) 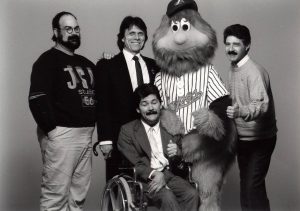 Primarily offering employability programs and volunteer services, PIMO got off to a difficult start, with high staff turnover. Fundraisers helped, but failed to overcome financial hurdles.

A ticket proceeds-sharing deal with the Expos, for example, raised $3,000 for PIMO—a big success at the time.

Following this activity, some 30 chapters brought people in wheelchairs and their attendants to baseball games—a first step toward universal access.

Support from a new backer since 2001 has enabled PIMO to invest more in collaborative activities. PIMO joined the Attendant Services Board (Table accompagnement) in 2002, followed by the ROPMM’s Transportation and Homecare Boards (tables transport et maintien à domicile).  In 2006, PIMO hired a part-time worker dedicated to collaboration and promotion.

PIMO Plans for the Future

To focus on its core mission, PIMO left the Homecare Board (Table Maintien à domicile) and relaunched the Attendant Services Board that had been abandoned by associations focused on other priorities.

PIMO is celebrating its 20 the birthday by developing new promotional tools. A theatrical performance at the McCord Museum will mark this anniversary, while a video promoting attendant services will be produced and presented at the Rehabilitation International World Congress.

Following these celebrations, PIMO will launch a study to ensure the expansion of its services, in line with its mission, throughout the Island of Montreal.

Through the Attendant Services Board, PIMO convinced the OPHQ to include such services among topics to be considered for its updated Comprehensive Policy. This resulted in the June 2009 adoption of the Comprehensive Policy: For Real Social Participation (Politique À part entière : Pour une véritable participation sociale), whose eight priorities incorporate the development of structured attendant services throughout Quebec[JW4].

At the same time, PIMO is coordinating a study on attendant service needs, piloted by the Attendant Services Board. Launched in June 2010, the study revealed a big service gap and highlighted the need for attendants by [JW5] people with various disabilities.

Based on this strategic planning process, PIMO opted for a comprehensive approach involving increased attendant services for the mobility challenged as part of broad-based support all residents requiring attendant services, whatever their disability.

PIMO then developed an initial service model to be tested in a pilot project and reached out to 25 organizations representing different kinds of disabilities requiring attendant services, to obtain their feedback and support.

PIMO subsequently designed a second model and decided to include the Attendant Services Board in its efforts, while seeking to further enhance the model and obtain strong support for its implementation. At the same time, PIMO suggested opening the Board to all stakeholders concerned with attendant services.

Growing from 4 to 25 members, the new board’s first goal was to develop a regional attendant service model based on PIMO’s second proposal.

An Attendant Services Board task force is now involved in tweaking PIMO’s pilot project model. Efforts are underway to document the Island of Montreal’s potential demand for attendant services.

The board has given PIMO strong support for testing the pilot project finalized by the Model Committee.

Thanks to the assistance of Employment and Social Development Canada (ESDC), the OPHQ and the Ministère de la Famille et des aînés (MFA), as well as the support of more than 20 partners, PIMO conducted its pilot project in a Montreal Health and Social Service Centre (CSSS) territory.

Bolstered by praise for this effort, PIMO submitted a plan entitled Attendant services to Support Senior Mobility (Accompagner pour Soutenir la mobilité des aînés) with the MFA, which accepted it. This project is set to be rolled out over the next few months in conjunction with the island’s CIUSSSs and volunteer support centres.

We hope that when this project wraps up in 2019, the Quebec government will provide the necessary funding to ensure the new regional structure’s viability, offering services to all those age 15 and up requiring attendants in Montreal and throughout Quebec.

GOING OUT TOGETHER! Promotional Campaign

With support from the OPHQ and the Attendant Services Board, PIMO launched its GOING OUT TOGETHER!—For Comprehensive Support campaign (ON SORT ENSEMBLE ! Pour un accompagnement à part entière) in 2017 to increase awareness among the public and elected officials of the need by the disabled for attendant services services outside the home.

PIMO and its partners hope this campaign will convince the government to follow through on its Policy by providing the necessary funding.

We have prepared a petition encouraging the government to do so. Please print it out, sign it and mail it back to us (or drop it off at our offices) by May 31, 2018.

Now available on our Web site, this petition will also be posted on the National Assembly’s site starting in late February 2018.

Please note that scanned or handwritten copies cannot be used. Please let us know if you would like a printed copy mailed to you with a stamped, preaddressed return envelope that you can complete and mail back to us!

The campaign, which was launched during Quebec’s 2017 Week for Disabled Persons (SQPH), will culminate with the submission of signed petitions to the National Assembly during SQPH 2018.

We need everyone’s help to reach our target of over 20,000 signatures and thank you for your support.